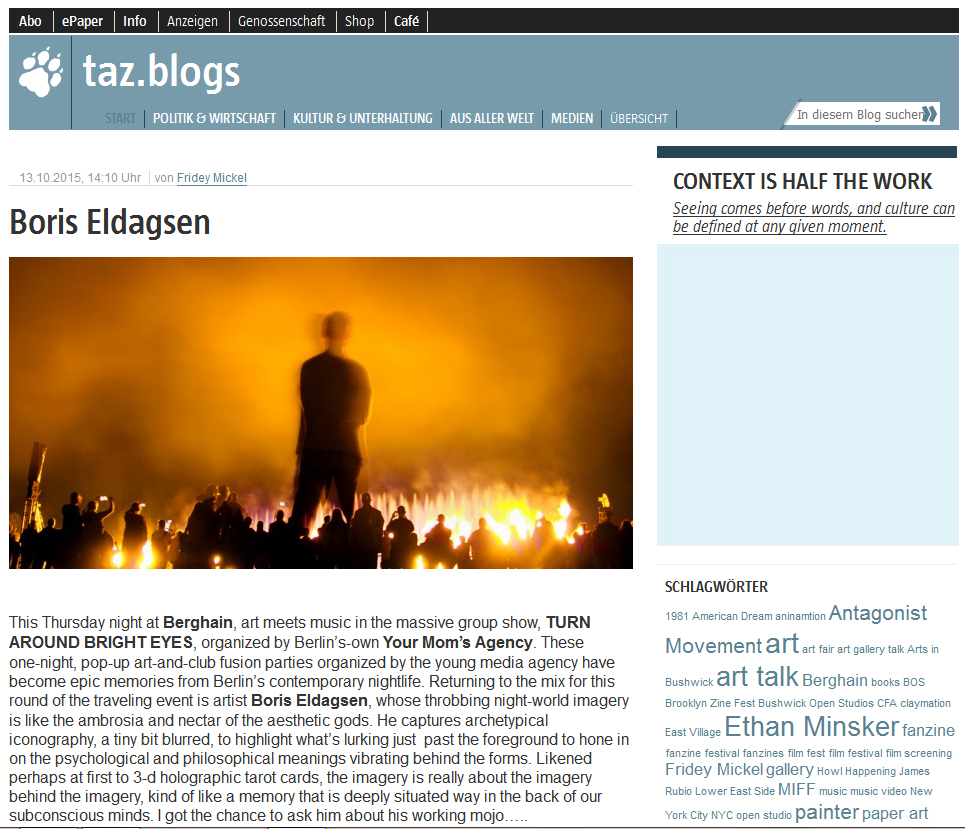 Thankyou Fridey for this interview!

This Thursday night at Berghain, art meets music in the massive group show, TURN AROUND BRIGHT EYES, organized by Berlin’s-own Your Mom’s Agency. These one-night, pop-up art-and-club fusion parties organized by the young media agency have become epic memories from Berlin’s contemporary nightlife. Returning to the mix for this round of the traveling event is artist Boris Eldagsen, whose throbbing night-world imagery is like the ambrosia and nectar of the aesthetic gods. He captures archetypical iconography, a tiny bit blurred, to highlight what’s lurking just  past the foreground to hone in on the psychological and philosophical meanings vibrating behind the forms. Likened perhaps at first to 3-d holographic tarot cards, the imagery is really about the imagery behind the imagery, kind of like a memory that is deeply situated way in the back of our subconscious minds. I got the chance to ask him about his working mojo…..

Why show at Berghain? It’s not a classic gallery situation…

I simply like the mix of artists and musicians involved. With most of them I share a love for the obscure, the change of perception, the love for ecstasy and the uncanny. ‘Turn Around Bright Eyes’ is an artistic event in one of the most hedonistic places in town. But it is much more than entertainment. Because of my philosophy background, I think it’s really important to know who you are, to define your interests and the feel of where you are moving. Two years ago, I went to an open talk by an artist. He was provoking the audience with this aphorism: ‘apost-modern art is taking a picture of his garage and then sending it to a gallery, and to a magazine, and to an advertising agency. And they are all clapping their hands’ Of course, you can feed all those different channels, and it might work to do more with your results or to move between different worlds, but ideally, you have a place where you belong and a direction you want to go. Either you go left or right. With what I do artistically, I don’t compromise. This is ‘my way or the highway’, I’ve been doing this for a long time, I was never worried about what was expected what was good and what is in fashion. I don’t have a target group, and I don’t have a product, I have an artwork. A product often needs to be ready at a certain deadline and then it’s as good as possible in that timeframe. An artwork tells me when its ready.

I never consider myself to be a photographer. I say I’m an artist working in photography. As a photographer you have to stick to conventions, to technical rules, but as an artist, I can break any rule. The only thing is I need to know what for.

I don’t like how photography has always been put into this sort of ‘amateur’ box; it really isn’t anymore. There used to be this necessity in painting because you couldn’t take a photograph and now it almost seems pointless to take the time to paint something when its so much faster to photograph it, and there’s a lot of potential stuff you can do with the material, which you can’t do in more traditional media….

There’s an inflation that comes with it. That everybody has a camera and can photograph all the time. And that might increase the amount of pictures that are taken but not the amount of artworks and there’s a difference between being able to have one lucky shot that is great, but being able to repeat this and know for what purpose is something different. When I started at art school, I started with drawing. When I moved from drawing to photography, it was first black and white photography, because it was really close to the Chinese ink drawings I did. Then it took 6-7 years before I dared to start with colourphotography, because I sort of saw it as very challenging regarding composition. In the world out there, there’s always colour, and it is hard to transform all those colour spots into a composition that works, one that is balanced and interesting simultaneously.This was one of the reasons why I started to work at night, all the things that don’t work as a composition, I can make disappear in the darkness. Working with light, working with available light and artificial light sources, I can work with transform the material in front of my lense as freely as a painter.

I wanted to ask you about that. I was reading one interview with you and it was talking about how your images are like poems. There were keywords popping out to me like ‘poem’, ‘inspiration’ and ‘intuition’. But I felt like looking at your images, the descriptive words given only explain the half of the aesthetic…

So, what is the other half that you didn’t find in there?

There should always be a gap between what you get out of the work and what we are able to describe with words: words always come short.

That’s true. I also think its really difficult to explain. I think your pictures are something you need to look at for a long time. You’re photographing in darkness, of course, but its almost like standing and looking at the composition in actual darkness, with your eyes developing starting to see more and more in the shadows. I guess I felt that the way they were being described made things seem too simple.

How are the situations in the pictures conceived?

When I work, I work intuitively, but I have a process before that allows me to find out archetypes. For example, if you were my model, I would do something with you I call ‘Tumblr Bingo’.

Yes, like the social media platform. I love Tumblr because it’s like the Internet of the 90s. Sex, Drugs, Rock’n’Roll, no censorship, you see things you could never imagine on Facebook. I’m following maybe 250 people all around 20 years old, and when I have a coffee break, I look at the endless stream of images. When an image talks to me, I ‘like’ it by clicking on the heart icon, it’s an intuitive thing. Then, after 2 months I have a look back at my ‘likes’ and try to analyze them. Why do I like those things? Is there a pattern? Themes returning?I download those images and I put them in folders. By giving names to the folders I’m trying to map out my own unconscious. I email the model just the titles of thos categories, like ‘Doppelganger’, ‘Clouds’ ‘Masks’, ‘Water’, ‘Moon’ whatever.The model selects the categories that speak to him/her the most. In a second email, I send the model my selection of 25 images from those categories. The model needs to react to those, and send me back allimages that have an effect on him/her. From those images, I start to develop the staged images. But the Tumblr Bingo is just a starting point; it’s not about copying images, it is about fusing and transforming them into our own psychological make-up. When we have these overlapping parts of mine and the model’s consciousnesses, we get closer to psychological archetypes. And the model is much more involved than if I just come with my weird ideas and try to superimpose them on you. And then, of course, I can ask much more; the model is much more conscious about what I am looking for, more willing and able to be in a certain pose for a long time.

I think there’s a lot of magic in them. Growing up, I was a really big fan of The Cure. In the early 90s, late 80s, their videos remind me a lot of your photos, and I attach such imagery to a lot of magic, too, like sort of dreamy magic.

I’ve always liked The Cure and if you talk about videos like ‘Close to Me’, Yes, there’s a link to this.

I did a video installation called ‘No Cure’. It’s based on Karaoke, and I have four old Germans around 80 years old in white boxes singing karaoke to songs by The Cure. Songs like ‘Cold’, Sinking’ and ‘100 years’. Seen live you’re standing in a big cube, and each wall is a big face, maybe 6×9 metres. They are staring at you, and you are standing in the middle and cast no shadow. There is only one person singing at a time. The melody is from the songs ‘Colder’, ‘100 Years’ and ‘Sinking’. But the score was completely new, created by an Australian contemporary composer, David Chisholm, who sampled bits and pieces of Richard Wagner’s ‘Gotterdammerung’ and electronics. It’s like a big opera. From the performers, one is not singing at all, he’s just watching, one is whispering quietly, one guy gets angry, and one lady is really touching in her performance.

Do you feel that a lot of people get the complete picture of what you are doing, looking at your photos?

I can’t look into people’s brains. For me, a strong artwork needs to work on many levels. We can talk about structural things like composition, colour, etc, but at the end, there needs to be content, a subject. First of all, if the work does not touch me unconsciously, there’s something missing. When it has a certain kind of aesthetic composition, something that interests me then I can see references and layers. This is my definition of the ultimate artwork, and this is what I try to achieve. I don’t know how many people see all layers.

I’ve always been interested in what is actually ‘timeless’? What does work across cultures? I grew up in southwest Germany with a cultural heritage of 2500 years, from Celtic places, with the Germanic people, then the Catholic Church, then WWI and WWII, everything on top… Also with my study of philosophy, I was interested in more timeless questions. After this, I got more and more into the fringes between philosophy and psychology. When I started to work at night, I had no idea why I was doing it, I was just interested in it. After doing this work for a long time, I ended up being in a botanical garden which had a little zen garden, listing all elements that are supposed to be yin and yang. Yin was the night and the moon, the sea and the female energies, etc. and I realised and wondered how so much yin could be in my photography, and no yang. I studied through the masters of Chinese philosophy, and I realised I needed to go deeper to find out what I was actually doing, and what is the Western understanding of these concepts. So I ended up with Carl Jung, and for him the yin was the symbol of the unconscious, and I got deeper into Jung, and he was the first able to connect all the bits and pieces of philosophers, fairy tales, mystics, the uncanny and the absurd, all the stuff I always liked and thought to be diverse. In his theory he proposed the idea of psychological archetypes. So I thought, ok if we really do have some kind of collective unconsciousness and we react to those types of archetypes, can I get in there? Can I create a work that’s working on this level, can I do it consciouslyuse my rational part as well in the process? That’s basically what I’ve been doing since.

Curated by Your Mom’s Agency