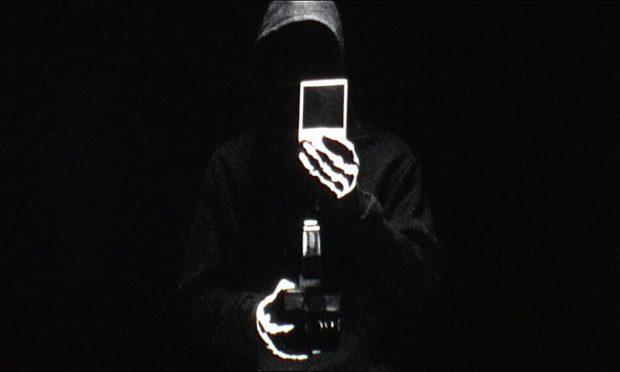 This ongoing project premiered in a hotel in Cannes, and akin to a rock tour, moves to as many cities, becoming a lifelong site-specific & culturally specific work.

One wall of the exhibition space is plastered with photo wallpaper depicting a hotel room’s interior.
On this wallpaper one encounters ten small works on the walls, each a framed dream-like polaroid image and evocative short story.

Each story is a portrait, depicting the last hours in the life of the person portrayed in the polaroid. From poetic to grim these works tell of the place, its inhabitants and their vanities. They are set in locations as diverse as Cannes, Paris, Munich and Melbourne.

While in the room the visitor notices a flashlight coming from the TV in the corner. The TV shows a
looping 3-minute black & white silent Super8 film created by BORIS + NATASCHA. An Ingmar Bergmanlike character, Death in a black hood, holds a polaroid camera. Every few minutes he takes a picture of a visitor to the room and the TV flashes.
Perhaps Death has captured your final moment? Are you next?

Coming closer to the TV, the visitor notices a little sign, advertising the option to payoff Death. For 100 dollars one can buy a letter of indulgence, akin to those distributed en masse to the wealthy in the middle ages, absolving them of their sins. The BORIS + NATASCHA letter of indulgence will buy the visitor some more time in the present moment and proclaim amongst other things: ‘Death had me in his viewfinder but I made a deal and bought some time.’ The letter of indulgence is signed and sealed by Death himself.

Or perhaps you’re the risky type? Then the ‘Russian Roulette’ Package which includes a limited edition DEATH ON TOUR T-shirt is for you. This protects you from Death when wearing the T-shirt – but only 90% of the time.

DEATH ON TOUR is a collaboration with Australian artist Natascha Stellmach.
More on www.borisandnatascha.com.