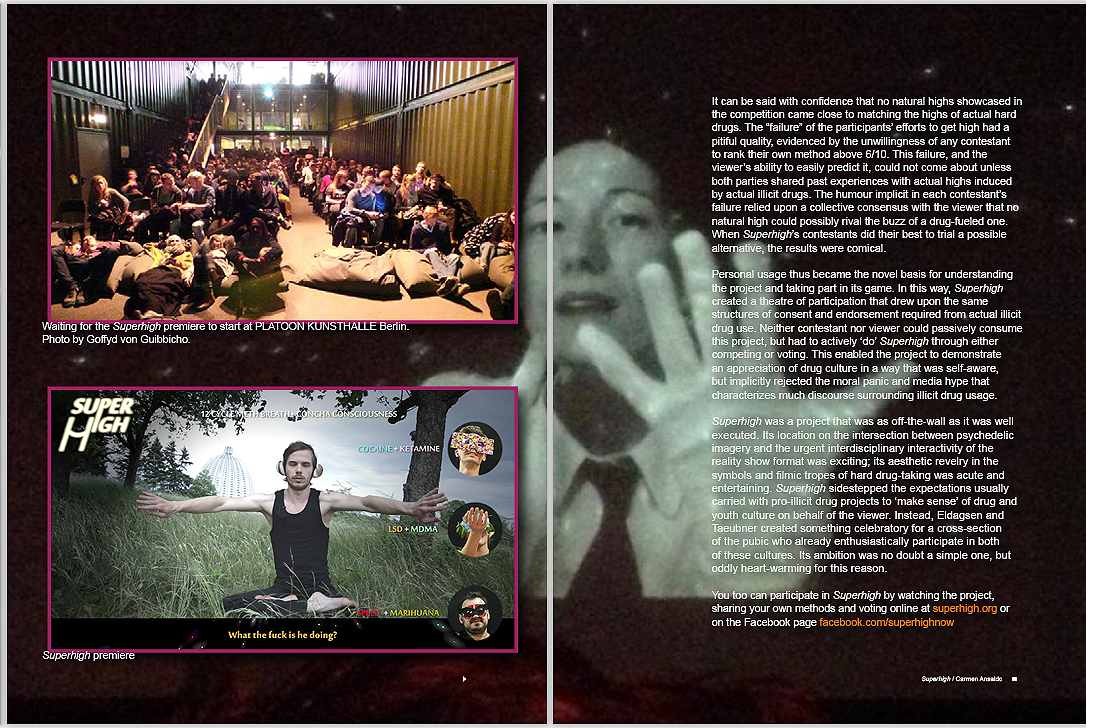 trouble, Australias long standing art magazine, is reflecting the best of the contemporary Australian art scene. And surprisingly reviewing SUPERHIGH. Read the review by Carmen Ansaldo here or on their webpage.

World Television Day 2013 (November 21st) saw the world premiere of Boris Eldagsen and Sabine Taeubner‘s mockumentary-reality competition Superhigh debuted at the Kunsthalle Platoon in Berlin. This projection took the form of a 40 minute reality television show in which six artist-contestants from around the globe battled it out for the chance to be crowned ‘The Superhigh’ – the artist who achieved the most intense high purely through natural methods.

Superhigh provided each artist the opportunity to showcase their unique method and to assess its effectiveness, ranking the intensity of their high from 1 to 10. Once all six artists had staged their attempts, viewers could vote online for what they believed was the most convincing high witnessed. True to the reality competition format, voting was informed by a panel of three judges providing viewers with running commentary. The Superhigh spin was that each judge was under the influence of illicit drugs (Cocaine, MDMA and Speed) so they could best assess which of the sober participants best matched their euphoric state. Methods showcased for achieving natural highs included staring at fire for long periods of time, spinning around in circles, meditating, yoga, listening to strange aural frequencies, and sharing breath with a partner whilst kissing. Participants then re-attempted their chosen methods, adding different techniques in the hope of intensifying their natural high. The panel members followed suit by complementing their illicit drug use with a second drug in order to better inform their evaluations.

It can be said with confidence that no natural highs showcased in the competition came close to matching the highs of actual hard drugs. The “failure” of the participants’ efforts to get high had a pitiful quality, evidenced by the unwillingness of any contestant to rank their own method above 6/10. This failure, and the viewer’s ability to easily predict it, could not come about unless both parties shared past experiences with actual highs induced by actual illicit drugs. The humour implicit in each contestant’s failure relied upon a collective consensus with the viewer that no natural high could possibly rival the buzz of a drug-fueled one. When Superhigh’s contestants did their best to trial a possible alternative, the results were comical.

Personal usage thus became the novel basis for understanding the project and taking part in its game. In this way, Superhigh created a theatre of participation that drew upon the same structures of consent and endorsement required from actual illicit drug use. Neither contestant nor viewer could passively consume this project, but had to actively ‘do’ Superhigh through either competing or voting. This enabled the project to demonstrate an appreciation of drug culture in a way that was self-aware, but implicitly rejected the moral panic and media hype that characterizes much discourse surrounding illicit drug usage.

Superhigh was a project that was as off-the-wall as it was well executed. Its location on the intersection between psychedelic imagery and the urgent interdisciplinary interactivity of the reality show format was exciting; its aesthetic revelry in the symbols and filmic tropes of hard drug-taking was acute and entertaining. Superhigh sidestepped the expectations usually carried with pro-illicit drug projects to ‘make sense’ of drug and youth culture on behalf of the viewer. Instead, Eldagsen and Taeubner created something celebratory for a cross-section of the pubic who already enthusiastically participate in both of these cultures. Its ambition was no doubt a simple one, but oddly heart-warming for this reason.

You too can participate in Superhigh by watching the project, sharing your own methods and voting online at superhigh.org or on the Facebook page facebook.com/superhighnow.