The Australian & New Zealand Contemporary Photography Gallery Pavlova is showcasing my 2007 work ‘Safety by Numbers’ in a groupshow on ‘Typology’.

I know, me in a Becher-inspired show of Aussie & Kiwi artists seems strange, but I like this subversive twist. Somehow it works as an antidote. ‘Safety by Numbers’ puts typology not in the image but in the concept – and it was produced under the influence of ANZAC cookies ;-).

‘Safety by Numbers’ was originally commissioned by Körber Foto Award and first shown at Deichtorhallen Hamburg, F/Stop Leipzig and Kunstverein Ludwigshafen. There was a special with ZEIT Online that is still available. Last year, John T.Hamilton, professor of comparative literature at Harvard University wrote an essay about it in his book ‘Security – Politics, Humanity, and the Philology of Care‘, Princeton University Press, 2013. Here’s an excerpt, page 293-296:

‘The blown up image was considerably blurry. From a distance, the minuscule numbers are hardly visible, yet upon closer viewing, they gradually become more readable as the image itself becomes less distinct. In Eldagsen’s words, the tiny numbers appear “like little flies on the windshield of perception”. (…) The white-printed numbers puncture the scene saturated in blue and compel the viewer to become a reader, to abandon the quasi synchrony of the photographic field for the diachronic linearity of the message. Each number is an invitation to attend to a text beyond that of the picture’s frame. Apprised of the nature of Eldagsen’s project, one may arguably suffer some presentiment of danger in this move from image to text, or at least anticipate a parody of danger. That is to say, one does not expect this quiet, ordinary scene to remain as innocuous as it first appears. So numbered, the picture resembles an illustration from some technical manual, as if the quotidian has now become an area that commands concern or requires careful attention. When we turn to the texts, we discover that the severity of the different threats varies. (…) Multiple narratives of varying degrees of urgency must be considered in order to reduce all risks to a minimum. (…) The ironic and at times cynical impulse of Eldagsen’s work reveals the fundamental and fairly self-evident ambiguity at the heart of every security project. (…) I can be secure only when I know what dangers may lie in store, only when I entertain the temporal dimension of possible events. On the other hand, the accreation of fictional scenarios contributes to my sense of unease or, in fact, my insecurity. A tranquil afternoon at the beach has turned perilous.’ 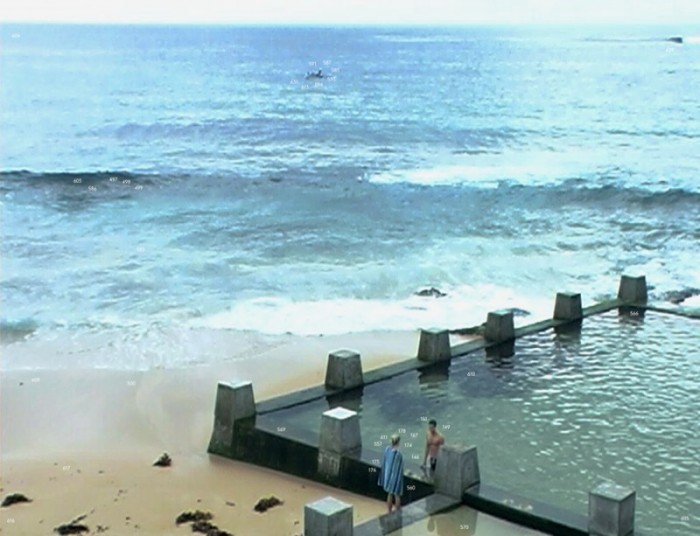