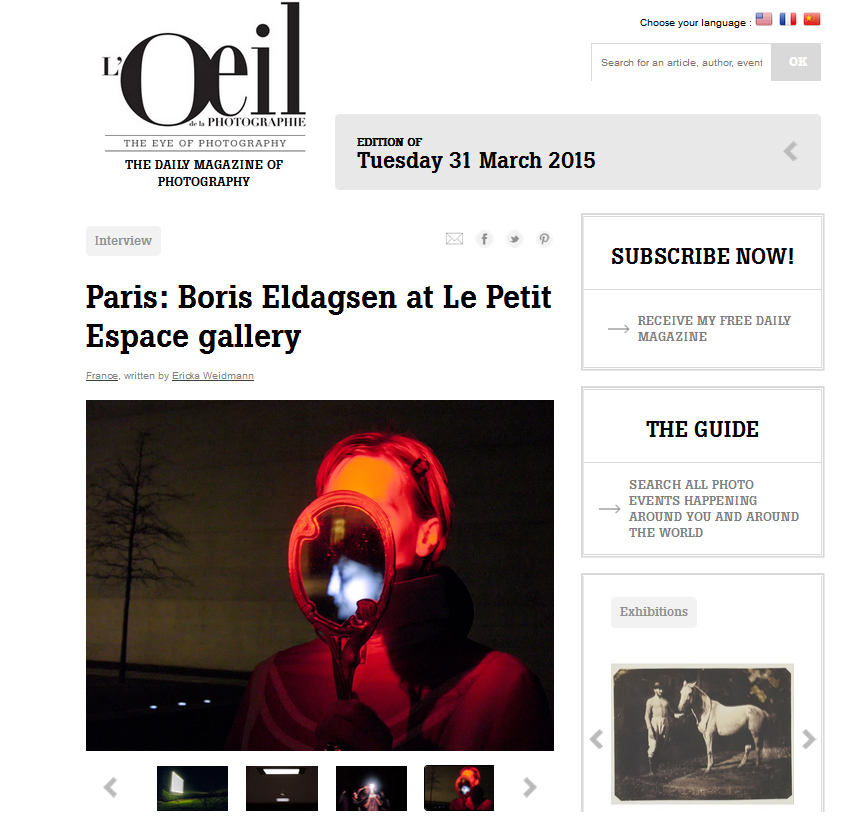 “I want work that’s intense and engaged.” Carine Dolek about the first year of her gallery project Le Petit Espace with Olivier Placet and why my work fits perfectly:

The Boris Eldagsen series The Poems—How to disappear completely will be on display at Le Petit Espace gallery through May 9th. We spoke with the gallery’s artistic director, Carine Dolek, about Eldagsen exhibition as they prepare for their first anniversary.

L’Oeil de la Photographie : We interviewed you when the gallery opened in May 2014. How was the first year ?
Carine Dolek : Great! The gallery will be a year old next month and we’re on our fifth exhibition. We participated in the European Month of Photography with Marianna Rosenstiehl’s The Curse, which was very successful and received a lot of press coverage. We’ve managed to exist in an oversaturated Parisian market while forging our own identity. I think that Olivier Placet and I can be proud of what we’ve done. In one year, I’ve learned two things: you have to talk about your plans, not leave them sleeping in drawers. If it were just me, I’d still be in the conceptual phase, playing with the idea in my head. With a partner and real-life deadlines, things happen very quickly, and my network reacted immediately. It was a wonderful surprise and I felt lots of support. I have so many people to thank now.
Then there’s the word, “courageous.” I’ve heard that I was “courageous,” that it was “courageous” to open the umpteenth gallery in Paris, that our choices were “courageous.” What’s courage? I looked up the definition: “The ability to do what frightens one.” Well, in that case, I only know courageous people.

LODLP : Can you tell us about our latest exhibition, Boris Eldagsen’s The Poems, how to disappear completely ?
C. D. : I noticed his work at a projection for the Prix Voies Off in Arles in 2013. I found it intriguing but my friends didn’t like it at all. I made note that the work didn’t leave one indifferent and put it in the back of my head. We missed each other at the Arles portfolio readings but finally met at the Encontros da Imagem festival in Braga, Portugal. It was a wonderful encounter. We talked all night long , it was raining. (Yes, it rains in Portugal.) When the gallery opened, I wanted to exhibit Boris’s work.

The premise is simple and unexpected: What is there between two stars in a black hole when there’s nothing to reflect light? What if darkness is the perfect metaphor for the divine. And from there we went on into the nocturnal, urban and poetic world, a willful walk through the illusion of perception where everybody takes their own path. I liked the freedom, the fever and the “What if?” and the gentleness and elegance and empathy of his world. They’re visual poems that everyone can relate to. It’s delightful, as is the medium: videos, prints and wallpaper covering the space and decaying over time.

LODLP : How does Le Petit Espace gallery compare to other Parisian photo galleries ?
C. D. : We like work that makes one think about representation, that makes people have an opinion. People are still talking to me about The Dwarf Empire and The Curse. I want work that’s intense and engaged. That’s exactly what I want, to show people things where they’re not sure what they’re seeing.

LODLP : For this exhibition, in addition to selling prints, you’re also selling very large-format works like wallpaper. Can you explain the reasoning behind this decision? Is it to attract a new audience ?
C. D. : I don’t know about a “new” audience, but there’s a certain audience to which we’re naturally suited given the gallery’s location, youth and offerings. You can still be a collector in a small Parisian apartment and on a small budget. It’s important for me to take the sacred aura away from works of art. We want to sell pieces that won’t turn a living room into a place of worship. Starting with the Armand Quetsch exhibition, we had very large-format pieces for sale, and we hung them close to the ground so they’d look like doors, better integrated into the daily environment. The way you hang a piece can show people more playful and modern ways to do it. I like polyptychs in corners. It’s very seductive. Wallpaper lets you have a “monumental” work covering an entire wall, and it’s something you can live with both inside and in an open space. The price is modest, the relationship to the work simplified. Also, when one feels an affinity for the world of an artist, wallpaper can help you bring it into your own world, making it the “backdrop” to your everyday life.